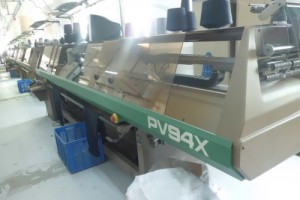 The way was now open for the production of machines with individual needle selection. Evolving directly from the PDE5 and PDE7 models, a very successful range of full-jacquard machines was developed, one of which, the P90, was one of the first examples of a type, which, in its concept and technical characteristics, was most similar to the flat knitting machines of today.

In effect, the P90 series represented the first generation of machines that was completely computer controlled and it was therefore truly revolutionary in its structural technology, while still retaining the knitting characteristics that had been derived in part from the machines of the PDE series. The double-system P90 had a needlebed width of 230 cm and was equipped with special needles for stitch transfer and narrowing; with single-butt platines and with auxiliary platines for individual needle selection. The P90S version was fitted with a stitch presser device (DSP), for the production of shaped pieces and the knitting of special stitch effects. In its P90G variant, the machine was provided with a set of special intarsia yarnfeeders. All machines in the P90 range were available in the coarse gauges of 2, 2½, 3, 3½ and 4, and from 5 to 12 gauge. The four-system version was the P94, which had features identical to those of the P90, (except for the number of systems and the provision of two carriages). All the full-jacquard machines were equipped with an electronic programming unit, with a 512 Kb memory and 5¼“ floppy disks. Connected directly to the machine, this allowed programming to be carried out even when the machine was running. On request, a separate programming unit was available, the PTV90, to allow patterns and fabrics to be prepared away from the machine: this consisted of a minicomputer, keyboard, graphics tablet, floppy disk drive and printer.

With the PV series of full-jacquard, completely electronically controlled machines with variable stroke, we have arrived at the latest step in the evolutionary process at Protti that has spanned more than 40 years. The advent of the variable stroke of the carriage, which automatically amends the width of its traverse, not only according to the width of the knitted piece, but also to take account of the number of systems in operation and of the number of needles that are knitting or transferring on each individual course, represents yet another revolution in knitting technology. This is a very important feature that is simple in its concept, but which was not previously possible to attain, when mechanical commands to the cams and other functions had to be transmitted to the carriage via bolts mounted at the very ends of the needlebeds. With the changeover to electronic control, it was no longer necessary for the carriage to travel right out to the ends to receive its commands, thus making it possible to cut out the inoperative sections of its traverse. Along with the PV Series, a programming system has also been developed: the PTV234 is a centralised autonomous unit for the programming of all the machines in this series, backed up by some innovative software, the „PROTEOS Knitting System“, for the advanced programming of patterns and fabrics. Soon, the other prestigious models of the PV Series were put into production: the PV93S (110 cm bed, equipped with stitch pressers), the PV93 (240 cm bed) and the other wide- and narrow-bed machines that remained in production: PV92SX, PV93SX (both with 110 cm beds), PV94E, PV94X, PV96X (240 cm beds), up to the recent PV93FX (110 cm, supplementary needle bed and set-up combs), PV91X, and PV91X-3 (240 cm), the latter being equipped with three carriages.

In parallel with the development of the full-jacquard machines, the evolution of machines for straight fabrics, for trimmings and for semi-jacquards has never stopped. This series of machines derives directly from the technical trials that started with the development of the models P457 and PT4. When considering flat knitting machines of the latest generation, one normally thinks just of the full-jacquard models with individual needle selection and very often forgets that there is a great demand for simpler machines, using a selection system based on auxiliary platines with various heights of butt. It might be tempting to ignore this range of machines, on which selection is made by groups of needles, but they are, in fact, most sophisticated models, equipped with full computer control and variable stroke.

The PT11, with 203 cm beds, was a single-system machine with high- and low-butt needles, built in gauges from 5 to 18, without stitch transfer. The PT21 offered the possibility of double transfer from either high- or low-butt needles, or both, and the PT22 was also built as a double-system. From these two models, we moved quite quickly to the current ones: the PT222 (and, before that, the PT221) and the semi-jacquards PT241 and PT242. These are very reliable, efficient and high-producing machines, based on a technology that is supported by 40 years of experience and continual development, to offer the best results at all times.

Please always check the washability under real conditions in your production. Monitor the

lubricant quantity and to readjust it, if necessary Advice on applications not covered in this leaflet may be obtained from your Molylub representative